Adverse childhood experiences: What we know, what we don't know, and what should happen next

This major report surveys the evidence relating to the prevalence, impact and treatment of ACEs, the extent to which ACEs should provide the basis for frontline practice and service design, and the known level of effectiveness and value of ACE-related approaches, such as routine enquiry and trauma-informed care.

Research into adverse childhood experiences (ACEs) consistently shows that a set of 10 adverse experiences in childhood are associated with an increased risk of poor health and other problems in later life. This consistent and compelling evidence has brought greater focus from a wide range of policymakers and public services on the harm caused by child abuse, neglect and other adversities.

However, this ACEs narrative has increasingly dominated the debate about the role of public services in preventing and responding to childhood experiences of trauma. It has resulted in several misconceptions which must be addressed as the ACE agenda is taken forward.

Watch our 1-minute summary of the headline messages on ACEs

This report sets out to examine the ACEs evidence base, in terms of its quality and the conclusions which have followed, and to consider the strength of evidence underpinning common responses to ACEs, including routine ACE screening and trauma-informed care.

By addressing these questions, the report provides a follow-up to the 2018 House of Commons science and technology committee inquiry on evidence-based early intervention. The committee’s report reflects a strong consensus that ACEs are harmful and associated with a range of negative adult outcomes, but also noted scepticism about the strength of this relationship and the extent to which current practice responses, including routine ACE screening, are effective or appropriate. The committee advised that progress could only be made if there was clear and robust evidence about the nature of ACEs and their impact on children’s development.

Read our one-page summary of key findings and recommendations 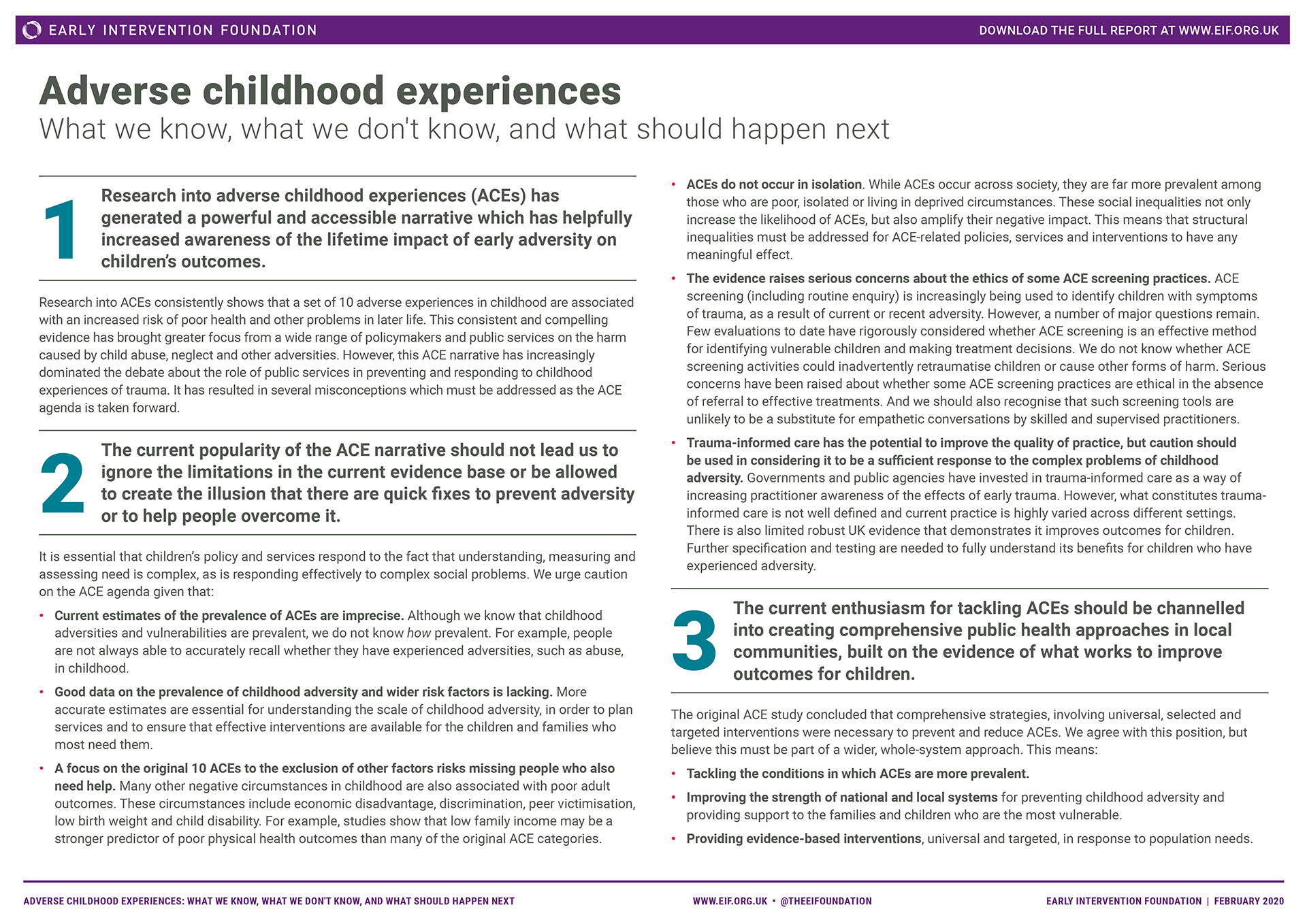 Blog 10 Mar 2022 Health screening using adverse childhood experiences: further evidence highlights the need to hit pause
By
Alan Meehan and
Prof Andrea Danese
EIF report 19 Aug 2021 Adverse childhood experiences: Building consensus on what should happen next
By
Dr Kirsten Asmussen and
Tom McBride
Blog 26 Feb 2020 Off to hell in a hand cart? Challenging a simplistic view of ACEs and their impact
By
Isabelle Trowler
Blog 26 Feb 2020 Childhood adversity and the brain: What have we learnt?
By
Prof Eamon McCrory
Blog 27 Feb 2020 A harsh spotlight: how the ACEs narrative lays bare the cost of doing nothing
By
Rachel Dickinson
Blog 27 Feb 2020 Vulnerability and resilience: how ACEs can help us to identify and reduce risks in children's lives
By
Anne Longfield
Blog 10 Mar 2020 Overplaying our ACE card?
By
Dez Holmes
Blog 5 Oct 2020 We need to do something to stop ACEs, but universal ACE screening is probably not the best place to start
By
Dr Kirsten Asmussen
Blog 19 Aug 2021 What should happen next? Identifying next steps for taking the ACEs evidence forward through a consensus-building exercise
By
Dr Kirsten Asmussen
Coverage 22 Feb 2020 Children being damaged by 'unproven' trauma checklist, report warns